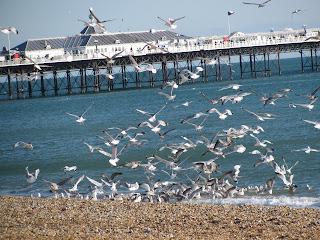 Having left Brighton 3 months ago to move to a tiny village in the middle of nowhere I miss everything about living in Britain’s most vibrant city, everything except the seagulls. Anyone who has ever lived in Brighton will be well aware of the giant seagulls that dominate seaside living, and they are a far cry from the idyllic image of seabirds gliding across the white cliffs of Dover found on postcards. There are three things that astonish me about Brighton’s seagull population.

1.       Their size. They are massive and intimidating. I have seen seagulls drag whole bin bags full of rubbish out of a wheelie bin and across the street and with the exceptions of eagles and ostriches this strength seems unnatural for a bird. One afternoon my housemates and I decided to take a relaxing break to the park to feed the ducks and it turned out to be a terrifying experience. As soon as we started throwing crumbs to the grateful little ducks a gang of 2ft long seagulls came and stomped all over the place flaring their giant wings making the ducks (and us) flee in terror. They are too big for their own good.

2.       Their fearless, planned attacks on anyone with food. The most dramatic seagull attack I witnessed happened not on the beach, but on a busy road. Sat quite happily outside of a café with a tea and a book a lady next to me had just received her fry up when suddenly out of nowhere this huge, malicious looking seagull swooped down like a bullet and stole a WHOLE SAUSAGE off her plate before manoeuvred quickly up onto a roof-sausage poking out of its beak. This gull had tactics as he must have been waiting for the perfect opportunity to attack. The worst place of all though is the beach. While it is funny to see tourists shrieking as their chips/ice creams/sausages are snatched from their hands its horrible when it happens to you; and they don’t just go for a chip but the whole bag.

3.       Their faeces. Sitting on the beach on a sunny day is a waiting game as you know that at some point someone is going to get splattered with the excrement of flocks circling overhead. Also it’s not just a little mess that you can wipe off with a cloth but a huge gooey explosion of grose. (Not surprising though if they are eating sausages).

I just read an article in the Argus by a man called Tim titled 'Why I'm Launching Brighton's Seagull Appreciation Society' in which he laments ‘why, oh why, is there still such hatred towards the most important animal in the city- the seagull.’ I think one reader’s comment to rename his club the ‘Winged Rats Appreciation Society’ best addresses Tim’s question. I might start a counter society and name it this.

Here is a very fuzzy video of some of Brighton's Seagulls doing what they do best.